Chief of Police Lurie P. Poston stands with his police car on Broadway.
Visible in the background is a liquor store that later became a garden shop and now Health Care Partners (right), as well as a small white building removed when the parking lot was added for Turner's IGA. To the right - Johnsonville Pharmacy and Venters' Department Store.

Mr. Lurie Poston (1900-1973) was the son of Preston Poston and Julia Miles. He was born in Hannah and moved to Johnsonville in 1934, where he was both a merchant and a farmer. He served as Chief of Police for 14 years and Magistrate for 16 years. 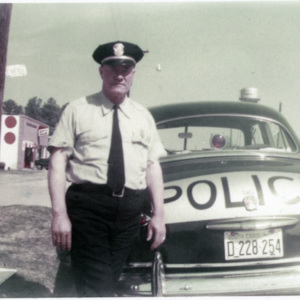 Granddaddy use to lock me up in his jail cell,don’t really remember if I was being bad or for fun!  Uldine daughter