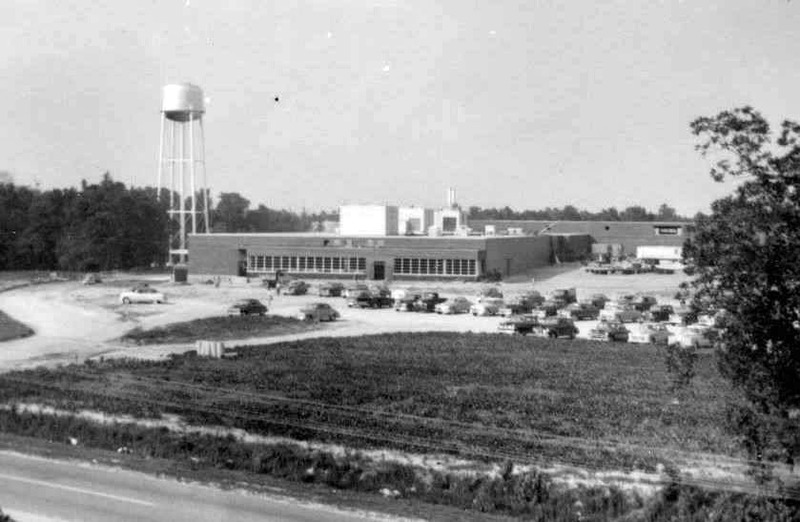 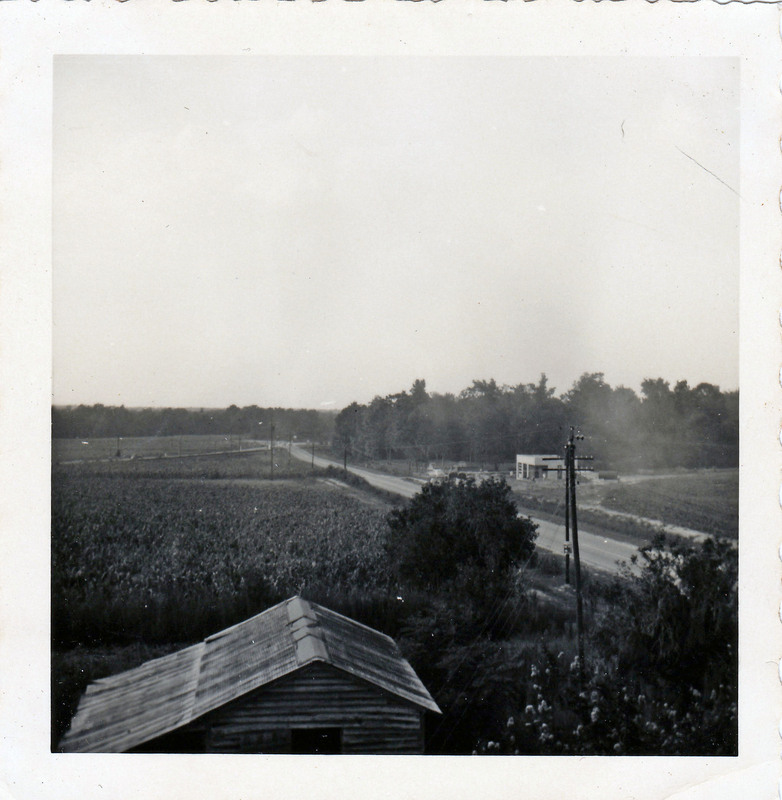 The future sight of Wellman, left, seen in 1954. The Wellman Texaco Station is pictured center left. 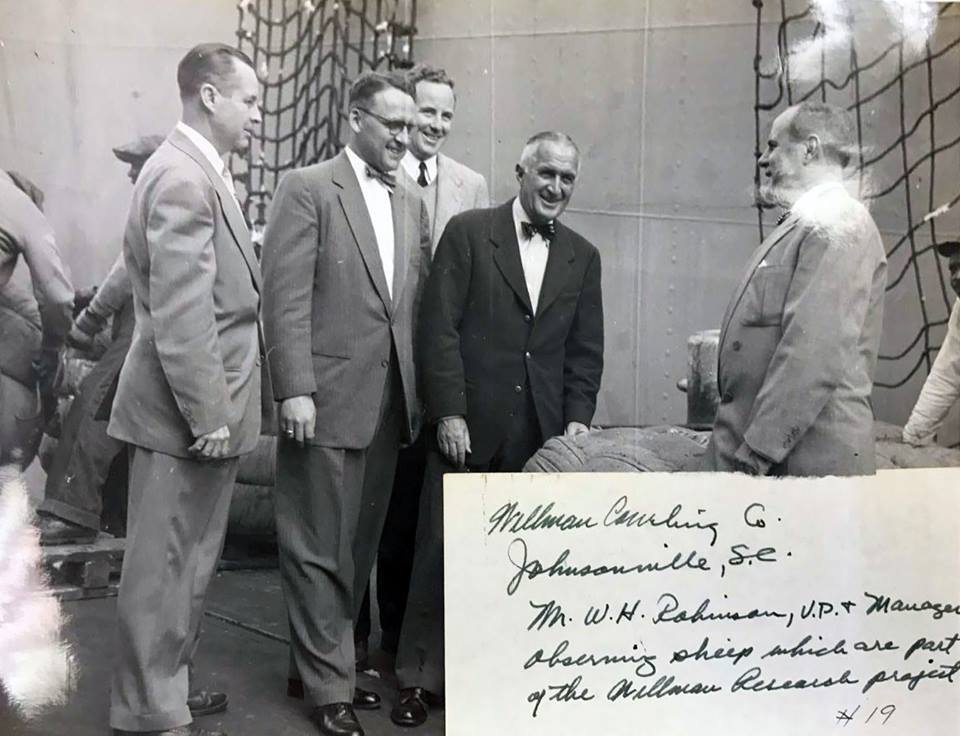 Sheep at the Wellman Research Project, circa 1956 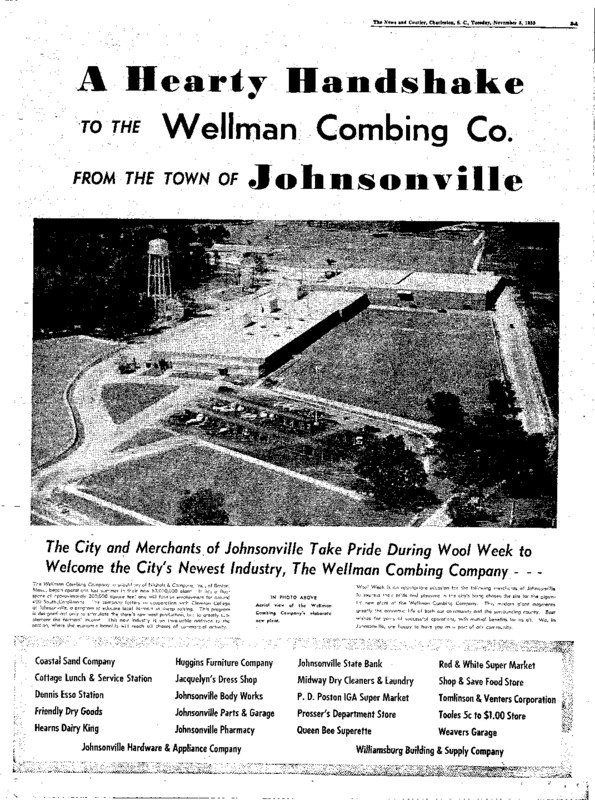 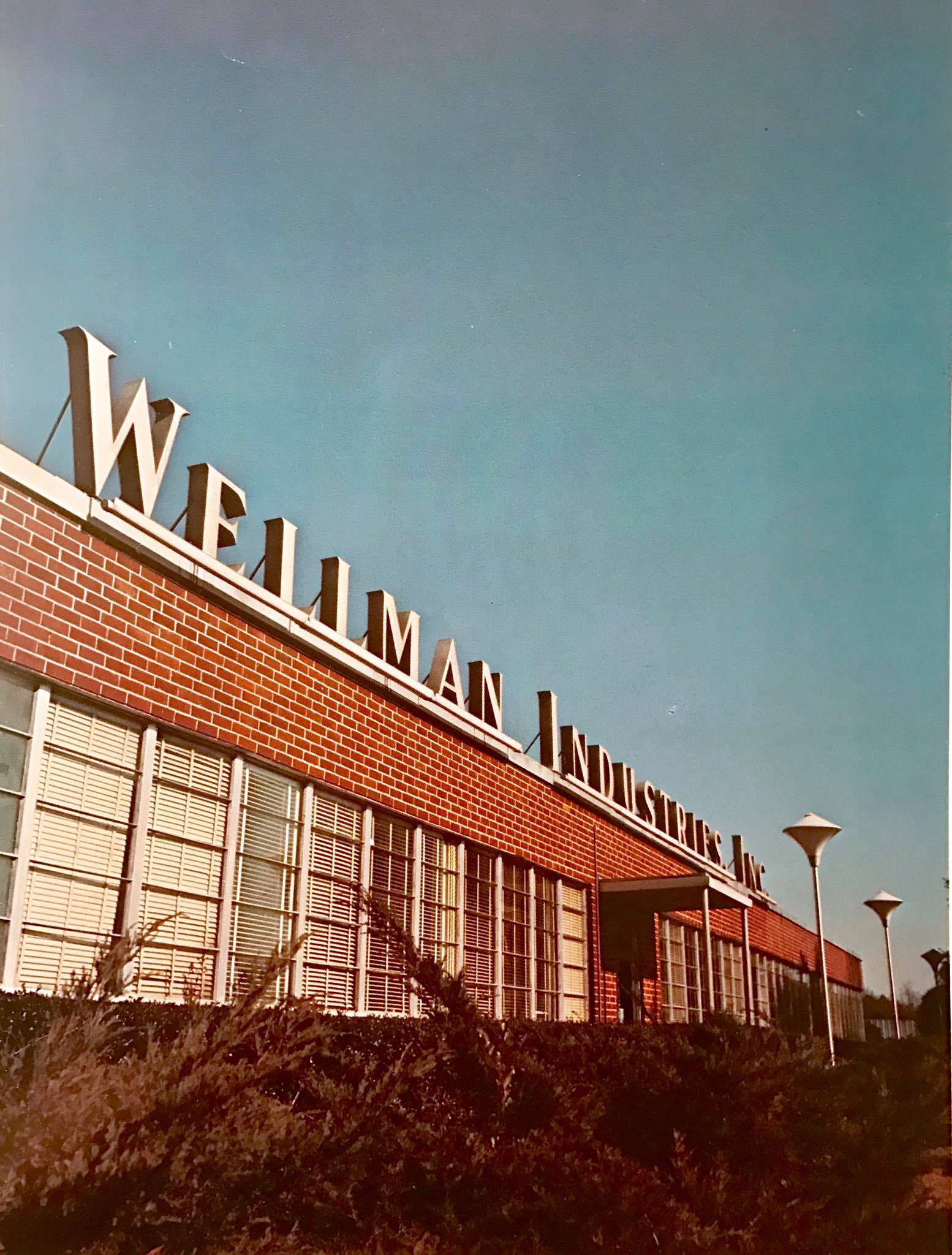 Mayor David Marsh and Joseph T. Huggins, cotton gin operator and American Legion district commander, represented the town in negotiations for the company in November 1953. At the time of the announcement, Marsh was joined on city council by A. J. Cox, Eugene Newell, H. M. Feagin, and W. Odell Venters.

The sight selected was tract of land about a half mile north of downtown Johnsonville and owned by J. A. Graham of Lake City, who readily agreed to sell the 200 acre tract along the south banks of Lynches River.  Johnsonville was chosen due to its availability of work force and its location to the Port of Charleston, 80 miles away by rail and road.  On March 30, 1954, Arthur O. Wellman met with Johnsonville's Joe Huggins to visit the plant site under construction.  Future plant manager Walter Robinson joined them.

As the 3 million dollar plant neared completion in the summer of 1955, preperations were made for the 150,000 square foot facility to employ its new 250 local workers.  According to an article quoting mayor Odell Venters in 1955, nearly 400 were already employed, exceeding initial estimates.  The plant was designed so that it could be enlarged over time as the demand for product increased.

The plant received its first shipment of raw wool in the spring of 1956, and began processing on time later that summer. Around this time, Wellman began a sheep research project to find sheep better acclimated to South Carolina's weather.  C. H. Mudge acted as herdsman for the project.  The sheep pasture was across Highway 41 from the Wellman Texaco Station.  In 1962, Wellman established a full-time model sheep ranch on the property.

The Wellman Texaco Gas Station was located in front of the plant on Highway 41. Wellman allowed employees to have a charge account there that was deducted from their weekly checks.  Gene Dennis and Robert Hooks were attendants; they pumped the gas (no self-serve), cleaned windshields, checked oil, and also serviced cars.

Due to the steady growth of the plastics business, it was decided that the fiber operations should be separated from other activities at the Johnsonville facility, and the Engineering Resins Division was established in 1968. Using recycled nylon fiber and virgin polymers, the division specifically manufactured nylon engineering resins, which were marketed to a variety of industries including automotive, consumer products, and even electrical parts for use in such products as fans, headlight housings, aerosol valves, and lawn and garden equipment.

Johnsonville began phase one of the Johnsonville Country Club in 1965, which included part of the clubhouse and 9 holes.  Arthur Wellman loaned $55,000 toward the project to further construction of the course and clubhouse.  When provisions of a federal loan prohibited further expansion and completion of the club, Wellman retired the federal loan and provided additional funds to complete the club.  The club was renamed The Wellman Club.

In order to reflect the changing nature of the firm’s business, the Wellman Combing Company was renamed Wellman Industries, Inc. in 1969, while Nichols & Company became Wellman, Inc. Three years later Wellman International Limited was established in Mullagh, Ireland, as a wholly owned subsidiary in order to produce polyester and nylon staple fibers for European markets. These fibers were manufactured from recycled raw materials, in part supplied by, ironically, other European fiber producers with which Wellman International was competing. The fibers were then exported, mainly to the United Kingdom and Europe.

In 1979, Wellman established a PET (polyethylene terephthalate) soft drink bottle recycling operation in Johnsonville. The opening of the facility came at a time when consumers were becoming much more environmentally aware, which in turn led to a steady supply of waste materials to be recycled by the company. Wellman rightly forecasted that manufacturers would soon advertise the use of recycled materials in the packaging of their products.

Sacks Industries, a Clark, New Jersey-based fiber broker and manufacturer of nonwovens purchased a 50 percent stake in Wellman in 1983. Operations of the two companies were subsequently merged and Tom Duff of Sacks Industries was appointed vice-president and chief operating officer. Wellman’s nonwoven business grew out of two Sacks plants located in Charlotte, North Carolina, and Commerce, California.  Two years after Wellman and Sacks Industries merged, the two companies were purchased by a group of investors and company managers in a leveraged buyout. Tom Duff became president and CEO of the newly renamed Wellman, Inc. In June 1987 the company went public when its stock began trading on the NASDAQ exchange at a price of $10.25 per share. Wellman stock was offered on the New YorkStock Exchange the following year at an initial share price of $17.50.

In 1989 Wellman entered into two arrangements that would not only ensure the company of a steady supply of recyclable materials, but a market for the resulting products as well. The first agreement, with Browning-Ferris Industries (BFI), a large waste collector, allowed Wellman to buy all the household plastic the company picked up in curbside programs. The second arrangement was with Constar International Inc., one of the largest PET bottle makers in the nation. Constar bought vast amounts of used PET bottles for recycling and agreed to purchase much of Wellman’s recycled plastic for use in its manufacturing.

Constar hoped to avoid complaints from environmentalists by using an estimated 25 percent recycled plastic in each of its bottles. In addition, through a 1989 joint venture Wellman and Constar (as Wellstar) began acquiring European bottle manufacturers with facilities in The Netherlands, France, and the United Kingdom. Wellstar, said to be the largest PET plastic bottle maker in Europe, sold the bottles and then bought them back for recycling.

In 2006, Wellman closed its fiber and bottling recycling divisions at the Johnsonville site.  Wellman Plastics Recycling, LLC was formed in 2008 following the bankruptcy and eventual dissolution of Wellman Inc.  Wellman Incorporated reopened its recycling business in Johnsonville in 2009 and created new jobs.  In 2015, Shanghai Pret Composites Co. Ltd., a Chinese company, announced the acquisition Wellman Plastics Recycling LLC in Johnsonville in an all-cash deal valued at more than $70 million.