Homestead built by Thomas Franklin Hanna (1881-1938) & Nekoda Laharp Altman (1882-1941). Thomas was the son of Franklin Evander "Vander" Hanna and Julia Ann Grier. Nekoda was the daughter of Daniel Webster Altman and Margaret Elizabeth "Maggie" Stone. This homestead was on a farm which was part of an original land grant to Hugh Hanna, great grandfather of Thomas Hanna and the first Hanna to settle in the Johnsonville area. The Hannas eventually built a new 2-story home across the field to handle their growing family.
Thomas carved his and Nekoda's initials into at least one of the timbers under the house to mark the original home. There was also a family rumor that some of the bricks used as the foundation for the house were used as ballast for ships arriving in America. Thomas and Nekoda's second son, Arles Timmons Hanna and his wife Violet Carter Hanna later occupied the home. Violet was the daughter of Morgan Ham Carter and Octavia Elizabeth Stone from the Vox Community. Arles and Violet married in 1927. Their 3 children, Evander Franklin, Yvonner Leta "Vonnie," and Jimmy Earl each grew up on the farm. Arles and Violet built a new home closer to the Vox Highway around 1950. Violet died in 1984, Arles in 1986.
Because the old home was vacant after Arles and Violet moved, Vonnie and Joe Dukes moved in when they were first married in 1954. Even as late as 1956, the house did not have an indoor bathroom and the family had to brave the weather when using the old outhouse on property. They jokingly referred to how easy it was to see chickens walking around under the house because the gaps in the floorboards were so wide before they moved to a newly built home in 1962.
The site around the old house was a popular spot for family activities. Vander, Vonnie, and Jimmy's children and grandchildren often camped out and shot fireworks on the property for Thanksgiving and New Year through the 1980s and 1990s.
The Old House remained vacant and deteriorated over the years until it was bulldozed and burnt in the early 1990s to make way for a new home on the property. 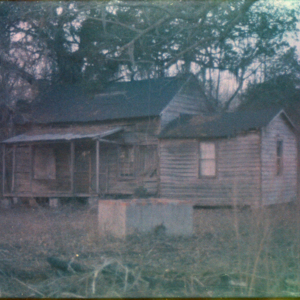