Thomas Lynch, Jr, the man who gave his name to Lynches River, which runs through Johnsonville and other towns in the Pee Dee

He was born at Prince George Parish, Winyah, in what is now Georgetown, South Carolina, the son of Thomas Lynch and his wife, the sister of Isaac Motte. He was schooled at the Indigo Society School in Georgetown before his parents sent him to England, where he studied at Eton College and at Gonville & Caius College, Cambridge.[1] He studied law at the Middle Temple in London, returning to America in 1772.

After his father's death due to a stroke, his widowed mother married South Carolina Governor William Moultrie. Thomas' sister Elizabeth Lynch married James Hamilton; one of their sons was James Hamilton, Jr., who became governor in the state in 1830.

Lynch, Jr. became a company commander in the 1st South Carolina regiment in 1775 and was elected to the Continental Congress. He was taken ill at the end of 1779. He and his wife sailed for respite to St. Eustatius in the West Indies. Their ship disappeared at sea in a storm and was never found. No one ever saw him again.

Before the voyage, Lynch had made a will, stipulating that heirs of his female relatives must change their surname to Lynch in order to inherit the family estate, a rice plantation. The family estate, Hopsewee, still stands in South Carolina. 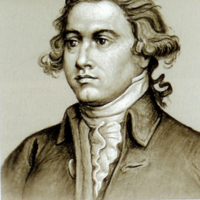 In some writings I have read that Thomas had another sister, Rutha Lynch. Do you know if that is true?

Sherry, I'm not certain, but that's possible. Where did you read that?